BOOK: The Sharper Your Knife, The Less You Cry 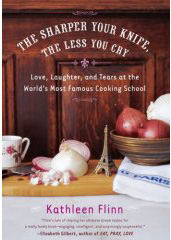 Many women will be at least a little jealous of Kathleen Flinn. At age 36, she leaves her high-powered corporate job to pursue her lifelong dream of attending Le Cordon Bleu Culinary School in Paris. She falls in love not only with the City of Light, but with a man she eventually marries. And, she gets a book deal to write about it all. It has all the makings of a Lifetime movie.

The Sharper Your Knife, The Less You Cry is not just a story about all the feel-good moments in Flinn’s life. She also records the many trials and tribulations of attending culinary school—the backstabbing, the stress, the intimidating chefs and the grueling classes. But, her feelings of self-doubt are quelled by her motivation to receive her Superior Cuisine diploma—despite the fact that she never intends to be a professional chef but just an excellent home cook. Flinn shares many recipes as well as hilarious stories of her many house-guests, including one particularly repugnant self-dubbed “wine snob.”

We finished this book in just a matter of days and really wished there were a second volume. Is Flinn still cooking regularly? Where does she work now? Is her husband still a knight in shining armor? The Sharper Your Knife, The Less You Cry reads like good, romantic fiction, except that it all actually happened.

© Copyright 2005-2020 Lifestyle Direct, Inc. All rights reserved. All images are copyrighted to their respective owners.